Have you seen our latest? 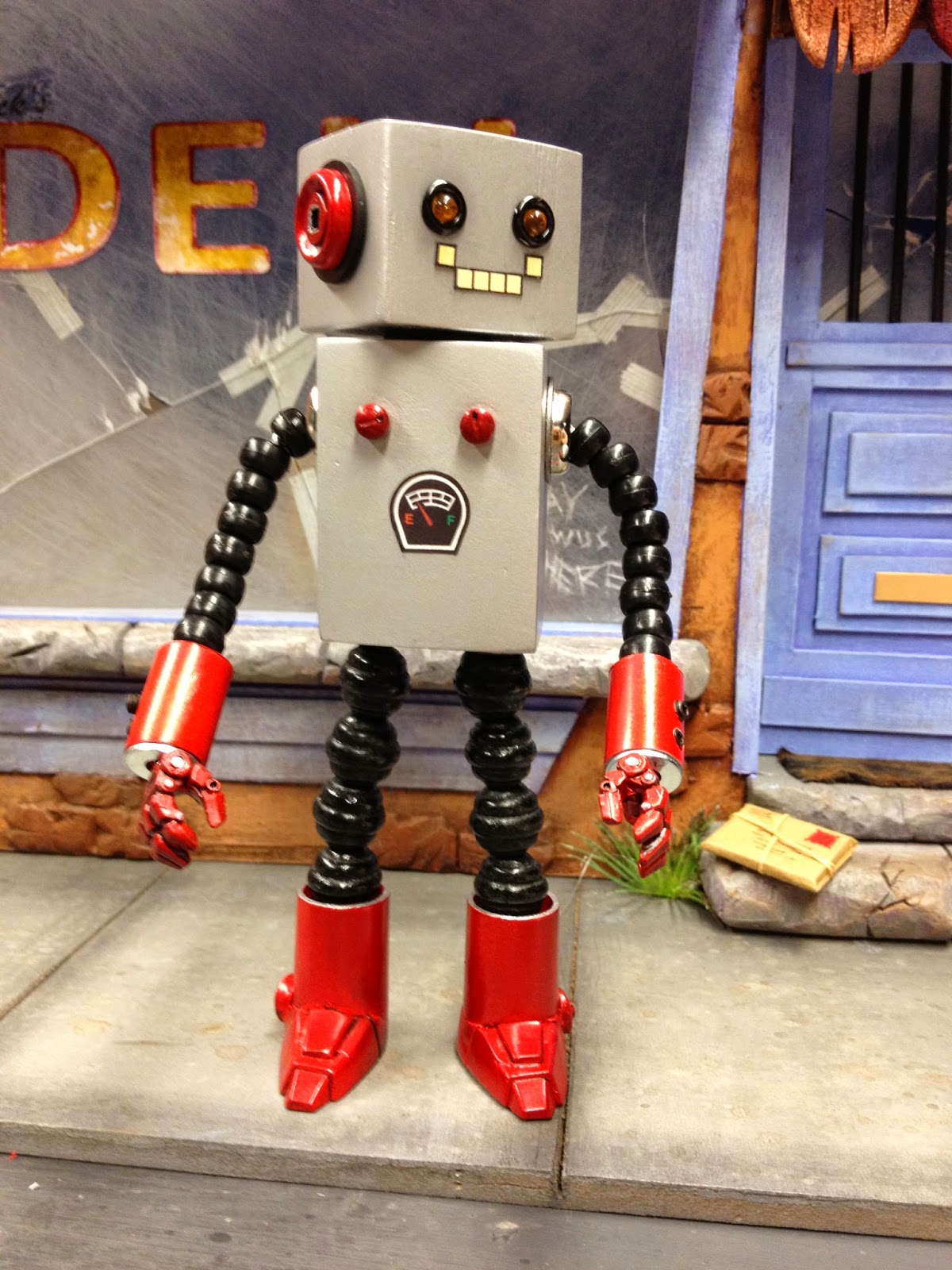 Check it out here.


FUN FACT: A**hole Robot's arms and legs have that cool retro bubble look thanks to BEADS! His basic armature is wire, and then shiny black beads were slid over the wires. Simple, but effective! Just like TNT!
Posted by Chris Walsh at 12:10 PM No comments:

2012 was our first year, and much like bull riding, it was exciting and exhausting.

Unlike bull riding, no bulls were involved.

As a small animation production company, we don't have a heap of admin or infrastructure, and that gives us the advantage of being pretty nimble and able to respond and react quickly to feedback, and to what we learn as we put stuff out. We can make essential decisions quickly, and that keeps things FUN, and exciting.

The flip side of that is, well- we don't have a heap of admin or infrastructure! That means all the heavy lifting, creatively and admin-wise, is done by the two idiots (wait, wrong word- geniuses) who head the company up, Geri and Chris. Thank goodness both guys possess incredible amounts of energy, passion, talent, and most importantly- good looks.

We spent the year pursuing TWO things: service work for clients, and development of our own animated content, made entirely from within our company. This is a pretty classic pair of objectives for media production companies, so why should Mad Lab reinvent the wheel?

In the realm of providing animation services, we found ourselves working with a fantastic client in Inhabit Media. This company has offices in Toronto and Iqaluit (which is in Nunavut, which is in Canada's far, FAR north). Inhabit Media focuses on telling stories of the north, with a focus on Inuit legends, myths, and tales. And so Inhabit and Mad Lab are working together to create a stop motion tale of childhood friendship, bravery, and child-eating ogres.

The use of stop motion, with its tactile, physical quality, works wonderfully as a way to tell these tales that are honest, primal, and very, very magical.

The project is ongoing, with Mad Lab overseeing storyboards, puppet fabrication, sets, and animation, under the direction of Neil Christopher of Inhabit Media. We'll post more information about the project over time...  but it's looking wonderful so far, and is truly exciting and inspiring to work on.

Another client we worked with was the Burlington Animation Festival. We created their signal film that was shown around online and at the event itself. Here it is.

This little project was a great chance to do some NON- stop motion work, since the animation is drawn.  It went over with a big bang (pun certainly intended).

As for our second objective, making our own content- we spent the year making MORE zombie shorts, which played in festivals like TAAFI (Toronto Animation Arts Festival International), we created  a mini-series using drawn animation called Vampire Instructionals, and we created a couple of  "secret projects"- these are short animated pieces that we're very proud of. We're planning to reveal these pieces over the course of 2013. Based on audience responses, these could be the projects we continue to pursue over time.

Thanks also to SPACE, Rue Morgue, Fangoria, Daily Dead, and Strange Kids Club, for the great coverage of our new business and our various projects.

Extra special thanks to Jason "Thumbs" Burch for his work as our intern. He created fabulous stuff you'll see in 2013... and to Phil Postma for his continued (and amazing) Mad Lab-inspired artwork that can be seen via our Facebook page, and our Twitter feed.


Best and last thanks goes to our families. Without their support and love we'd still be lying on a couch just watching cartoons, instead of out in the world, MAKING 'em.

What does 2013 hold? Invasion by alien overlords? The rise of a bizarre superbug that will crush the human race beneath its feet? Perhaps a new album from Justin Bieber? We really can't say.. but regardless of how crazy the new year gets, we'll just keep making with the Mad Lab goodness...
Posted by Chris Walsh at 4:08 PM No comments:

It serves as some good advice, if you are tempted to stick your tongue out during the holiday season.

The toothpick is very important! It's used for animating eyes... and also gives the animator something to stick in his mouth when bored. Be sure to use the high quality, ROUND toothpicks, not the cheap FLAT ones.

The beautiful Bolex camera is being used to hold a set piece steady. It's not actually being used for animation.

Finally- these time-lapse, behind-the-scenes stop motion clips are a dime-a-dozen these days, you'll see them done for basically all stop motion features. And as you watch, you get the idea pretty quickly- take a frame, move the puppet... repeat.

SO- since at Mad Lab we are always trying to keep the audience engaged, we've added some EXCITEMENT at certain points.

Ridley Scott's masterpiece is without a doubt one of the most impressive, and important, examples of sci- fi in the history of cinema. We're sure you've seen the film dozens of times, right? So no doubt, this scene is burned into your brain. You probably even have the dialogue memorized. So all together now- click, PLAY, and repeat after Mad Lab: "I've seen thing..."

Vampire Instructionals- Back To His Crypt

Some weeks ago, we introduced Mad Lab fans to our little creation, a wee vampire kid who did his best to school other vampire kids in the ways of the blood sucker.

Each episode saw the little guy choosing a "How To" topic, that ranged from "How To Turn Into A Bat" to "How To Drink You-Know-What". He even covered a subject that few non-vampires realize is very important to these creatures of the night: DANCING.

For that important topic, the little guy took his time and warmed it up, over THREE episodes.

The clips were very fun to make, and we had some great feedback. And they featured the great voice talent of young Marco Bertolo, who may very well have a long career as a cartoon voice actor ahead of him, now that he's cut his teeth in cartoon land (his vampire teeth, that is).

We hope you've enjoyed this run, and in time we hope to bring the little guy out of his crypt for more cartoon adventures. Maybe we'll team him up with other monster kids, or send him on some serious world-saving adventures (after sundown, of course). Time will tell!

In the meantime, if you haven't watched them all, here's the latest- "How To Drink You-Know-What".

See you soon, little vampire! Have a nice nap. We'll be careful when we wake you up next-  you're liable to be pretty thirsty. 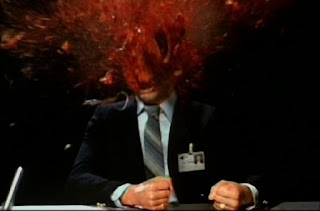 Here at Mad Lab, we're always amazed at what what it means to be human.

We're born, we grow old, we pass away. And over that experience, any number of strange and bewildering afflictions can befall us.

Here's one we just stumbled up. Exploding Head Syndrome. EHS. We defy you to come up with a more dramatic name for an affliction.

Of all the ways this gives us pleasure, the best is that on the Wikipedia entry, it states at the top that this article "needs attention from an expert in Medicine."

To clarify- this image is from David Cronenberg's Scanners. This does not actually happen when you have EHS.

Scary Stories To Tell In The Dark 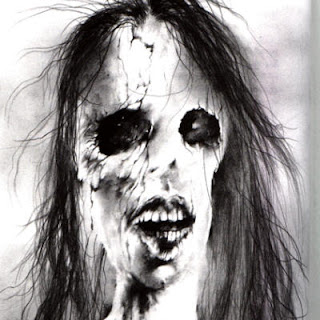 "Classic" is thrown around very loosely, but we sincerely mean it as our shivery fingers type today...

Scary Stories To Tell In The Dark was written by Alvin Schwartz and published in 1981. It's a collection of urban legends, myths, and generally weird stories gathered largely from American folklore. The stories are direct and chilling.

But what many recall from this book are the illustrations, by Stephen Gammell. Can you imagine a collection of stories for kids being published today that are as disturbing as these? Nope. But in part, that is what made the 80s the 80s- "kids stuff" had real bite.

And these images STUCK. Show the above image to an entire generation, and they'll cover their eyes! But then- peek out to see it again... and again. Remarkable.

If you don't have a copy of this book, you can get one cheap via Amazon. It's exactly the right book for this time of year: chilling, unnerving... and wonderful. 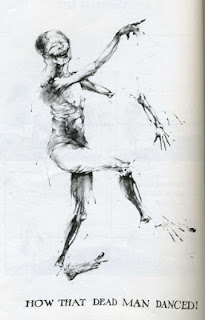 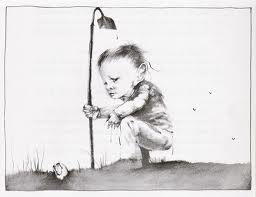